I Tempted Her With Pheasant

Last month when I was at Kookoolan Farm I bought a pheasant from Chrissie. I've never cooked a pheasant before but thought it would be fun. Like my goose adventure, only with less grease! I find cooking exotic birds to be a bit less intimidating than cooking exotic beasts. They seem more accessable, and like with the goose I ended up with lots of 'extra food' from the pheasant.
Cooking a pheasant clearly should not be a just me for dinner kind of night so I invited some friends over. One friend hemmed and hawed because, it being a Saturday in June, she had three other parties to go to. I finally convinced her to come under false pretenses of homemade mead, but she was happy with pheasant and wine.
Pheasant is a dark meat bird with considerably less breast meat than a chicken. I looked at lots of recipes for roast pheasant and all of them called for wrapping the breast in bacon before cooking. Everything is better with bacon, isn't it? In the end, fearing a dried out, tough bird I opted to braise the pheasant instead of roast it. The recipe I used was a simple one and everyone loved the flavor. I added a split chicken breast in on top of the pheasant fearing there wouldn't be enough meat for all three of us, and though it wasn't necessary it was nice to have the leftovers. I would certainly use this reciepe again, with modifications found below. 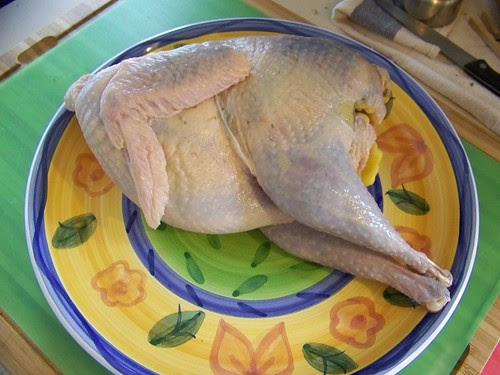 Braised Pheasant
1 pheasant (plus a chicken breast or a few chicken thighs)
3 tbs flour
salt and black pepper
2 tsp dried rosemary
2 bay leaves
5 peppercorns
bacon fat and/or goose grease
1/4 cup red wine
1 1/2 chicken broth
1/2 a medium onion, sliced
4 cloves of garlic, smashed or cut in half
1 tablespoon flour
1/2 tsp ground dried rosemary
1) Cut the pheasant into pieces. I cut the leg/thigh pieces off, cut out the backbone and hacked the breast apart into two pieces. I saved the backbone, wingtips and trimmed neck and tail skin/fat for stock later. Preheat oven to 300 degrees.
2) Combine the flour with salt and pepper making sure the flour tastes seasoned. Rub the flour all over the pieces of pheasant. Heat the bacon fat and/or goose grease (lard or coconut oil if that's all you have) in a cast iron skillet. Brown the meat skin side down first until it is nice and golden brown. Do it in batches, making sure not to crowd the pan.
3) Place the browned pieces in the bottom of an enameled cast iron dutch oven (or other heavy pot with a well fitting lid). Be sure to keep chicken pieces on top of the pheasant as it doesn't need to cook as much. Tie the peppercorns, bay leaves and rosemary in a cheesecloth bundle and tuck in between the pheasant pieces. Add onion and garlic on top of the meat. Deglaze the pan with the red wine and pour that over the meat. Add the chicken broth and place in the hot oven.
4) Allow pheasant to cook for AT LEAST 2 1/2 hours. Probably more. When the pheasant is cooked through and the wing and leg joints move freely remove the meat to a platter and cover with foil to keep warm. Remove the onion and garlic either with a slotted spoon or by pouring all the sauce through a sieve and catching the liquid in a measuring cup, gravy separator or small saucepan.
5) Make the pan liquid into a gravy by cooking flour and ground rosemary in an equal amount of either fat that rises to the top of the pan sauce or more bacon grease. When the flour is cooked and starting to brown add the pan liquid into the roux and stir over medium high heat until flour is incorporated and the gravy is starting to thicken. Stir constantly and reduce heat to low when it is bubbling and thick.
6) Serve pheasant over wild rice, Israeli cous cous, orzo or mashed potatoes making sure to pass the gravy.
The cook is always most critical of their meal and my guests really enjoyed the experience. I found the pheasant to have a really pleasant flavor but it was tough. I braised mine for just over two hours and think another hour in the pot would have done wonders. A dry roasted hunk or meat or bird needs to reach the proper temperature but not go much above. A braised hunk of bird or meat needs to stay at the proper temperature long enough to melt connective tissue. I didn't give my pheasant enough time and it was pretty tough. I'll also add more rosemary next time. It was a lovely flavor and the original recipe called for branch 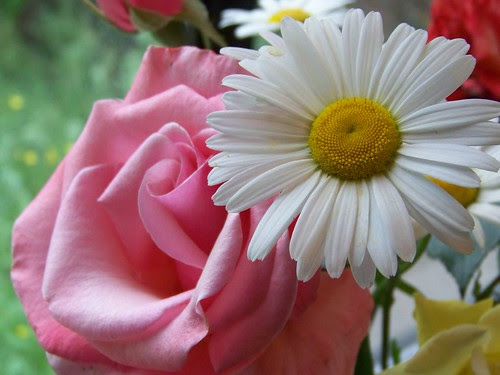 es of rosemary to be placed over the meat and liquid in the pot. I think that is a fantastic idea.
In the end, my guests enjoyed themselves. The gravy helped a lot (my trick to good gravy is to season the flour for the roux well with rosemary, basil, oregano or whatever other herb might fit the situation) and a couple bottles of wine with dinner helped even more. I didn't get any photos of the cooked meal, we were too busy eating it. Here is the lovely flower bouquet that was on the table.
I wonder what's next on my exotic bird cooking tour? Duck? Pigeon? Pastured turkey? Bring it on!
For more great blogs about cooking real food and why it's important check out this week's Real Food Wednesday!
Posted by Alyss at 2:24 PM

The contents of this blog are protected under the Attribution-Non Commercial-Share Alike 3.0 Unported Creative Commons copyright. This means you are free to share this work on your own blog if and only if your blog does not receive any ad revenue, your blog is open for others to share and remix and you attribute my work to me (name and link or blog name, please).

Please see the Creative Commons website for more information about CC Licenses, and about my specific license. Feel free to contact me at alyssbroderick@gmail.com or by leaving a comment if you have more questions or would like to use any of my work for something that does not fit within the specifications of the license.