You know what's the worst? The absolute pits? When you put stuff in your crock pot in the morning, spend all day thinking about the food you are going to eat when you get home, arrive home only to find that your crock pot didn't cook your food for whatever reason. Sometimes that reason is that your darling boyfriend "forgot" to turn it on like you asked him, sometimes that reason is that your janky house has janky outlets and there was never power to the crock pot. Sometimes you were just in such a rush in the morning that you put everything in but didn't turn the darn thing on. No matter the reason, it totally sucks.

When this happened to me last week I did, at least, have one shining beacon of hope. In addition to putting black beans in the crock pot I had started a batch of Sue Gregg's Blender Batter Cornbread. You knew the blender batter method made great pancakes (because I told you it did and you all ran out and tried it this weekend, right?) but did you know it makes an amazing cornbread too? It does! Sue's recipe calls for whole kernel corn and wheat berries processed the same way as for the blender batter pancakes. I didn't have any wheat berries in the house so I used white flour, which is lower in phytates than whole wheat (if you are really worried about 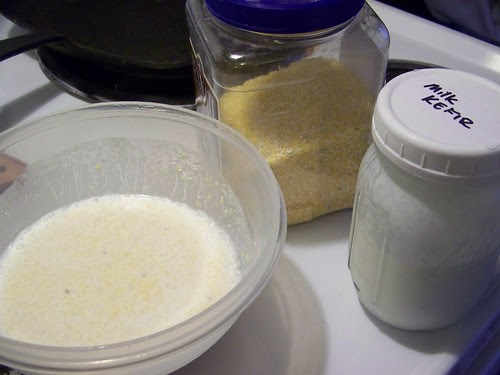 phytates in the corn and wheat then be sure to use wheat the way Sue recommends. Amanda Rose of Rebuild from Depression gives some compelling research results that corn does not have the phytase necessary to actually break down the phytic acid on it's own).

Be sure to check out Sue's recipe and then read on to see how I modified the recipe. Also, a chilling tale of new roommates gone awry, gnashing of teeth and flames. Seriously, keep reading.

*The night before combine the polenta and the kefir in a bowl. Stir to combine and leave to sit at room temperature over night. 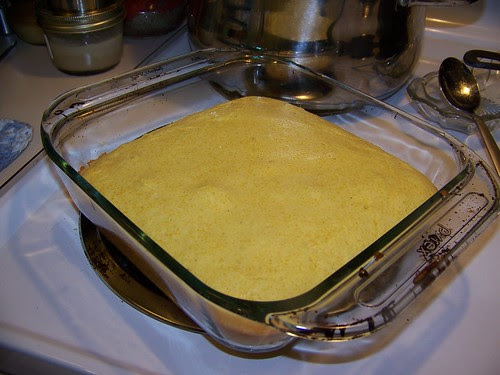 our blender and grind. Again, start slow and once the mixture is making a vortex then allow it to grind for a couple minutes. Add the eggs and blend then add the melted butter while the blender is running.

*Preheat the oven to 350 degrees. In a separate bowl combine the flour, baking powder and salt. Combine the wet ingredients from the blender with the dry ingredients in a medium sized mixing bowl. Stir until they are combined, but still lumpy. You don't want to overmix quick breads or they will be tough.

*Generously grease an 8x8 baking dish and pour the batter in. Cook at 350 for 25-30 minutes or until a knife stuck in the center comes out clean. Serve with lots of butter and honey.

My beans were a bust but the cornbread turned out perfect. It was golden, lightly browned, light textur 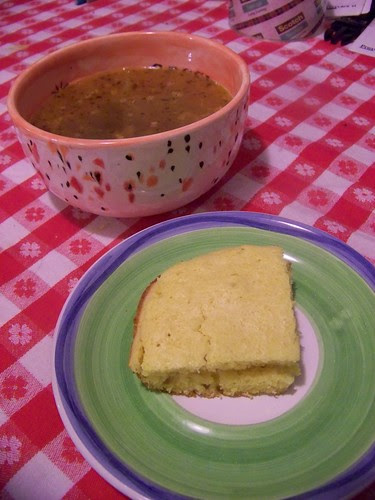 ed, deeply corn flavored. I whipped up a soup to eat instead of my beans, cut a piece of cornbread and sat down to dinner. As I was eating my new roommate came into the kitchen and started a pot of water for pasta. I will give him the benefit of the doubt and say our stove is set up strange but all I know is a few minutes later there was a pop like a gunshot. I turned around and the pyrex dish the cornbread had been cooked in was shattered and right before my eyes my beautiful cornbread caught on fire! He had turned the wrong burner on!!

Damage control was quick and some of the cornbread was even salvaged. I was angry and upset for a minute or two (my cornbread!!) and then we got down to the business of digging pyrex shards out of the linoleum. My cornbread! My beautiful cornbread!!

Luckily, I have this awesome recipe, more polenta in the cupboard and my roommate's pyrex dish to cook it all in.
Posted by Alyss at 11:01 AM

The contents of this blog are protected under the Attribution-Non Commercial-Share Alike 3.0 Unported Creative Commons copyright. This means you are free to share this work on your own blog if and only if your blog does not receive any ad revenue, your blog is open for others to share and remix and you attribute my work to me (name and link or blog name, please).

Please see the Creative Commons website for more information about CC Licenses, and about my specific license. Feel free to contact me at alyssbroderick@gmail.com or by leaving a comment if you have more questions or would like to use any of my work for something that does not fit within the specifications of the license.